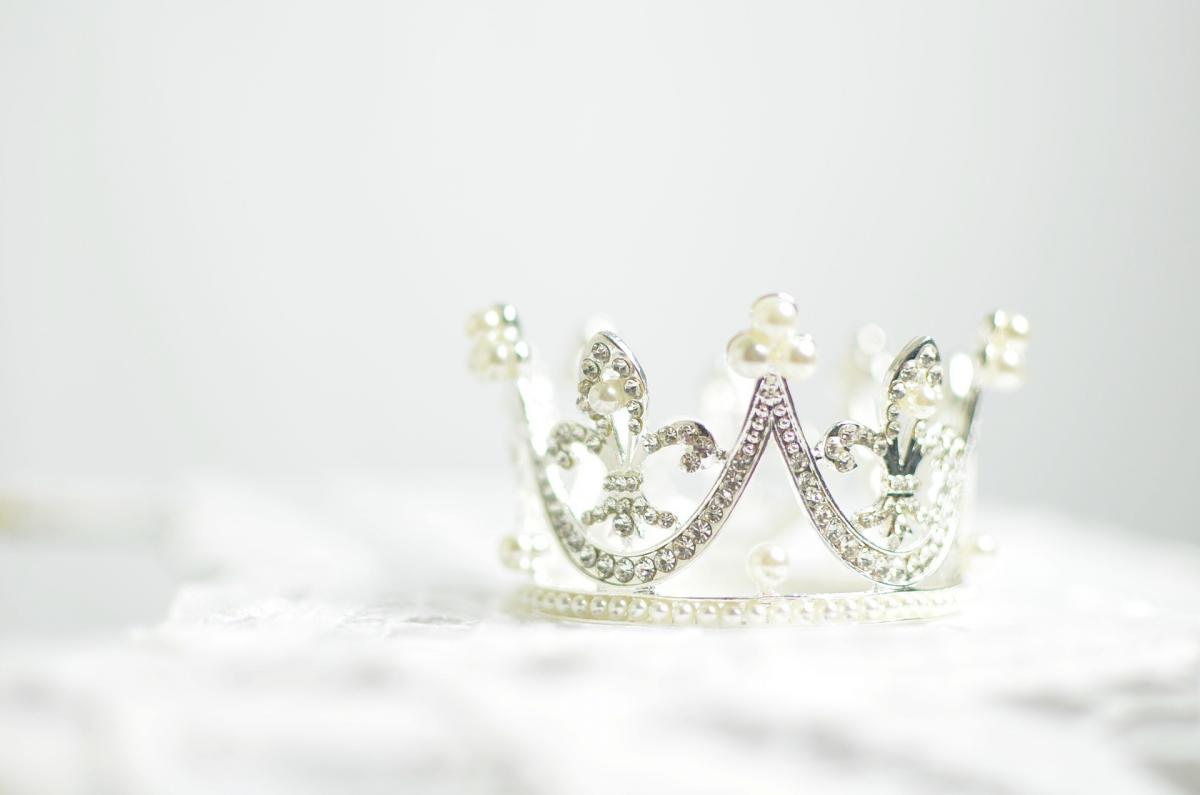 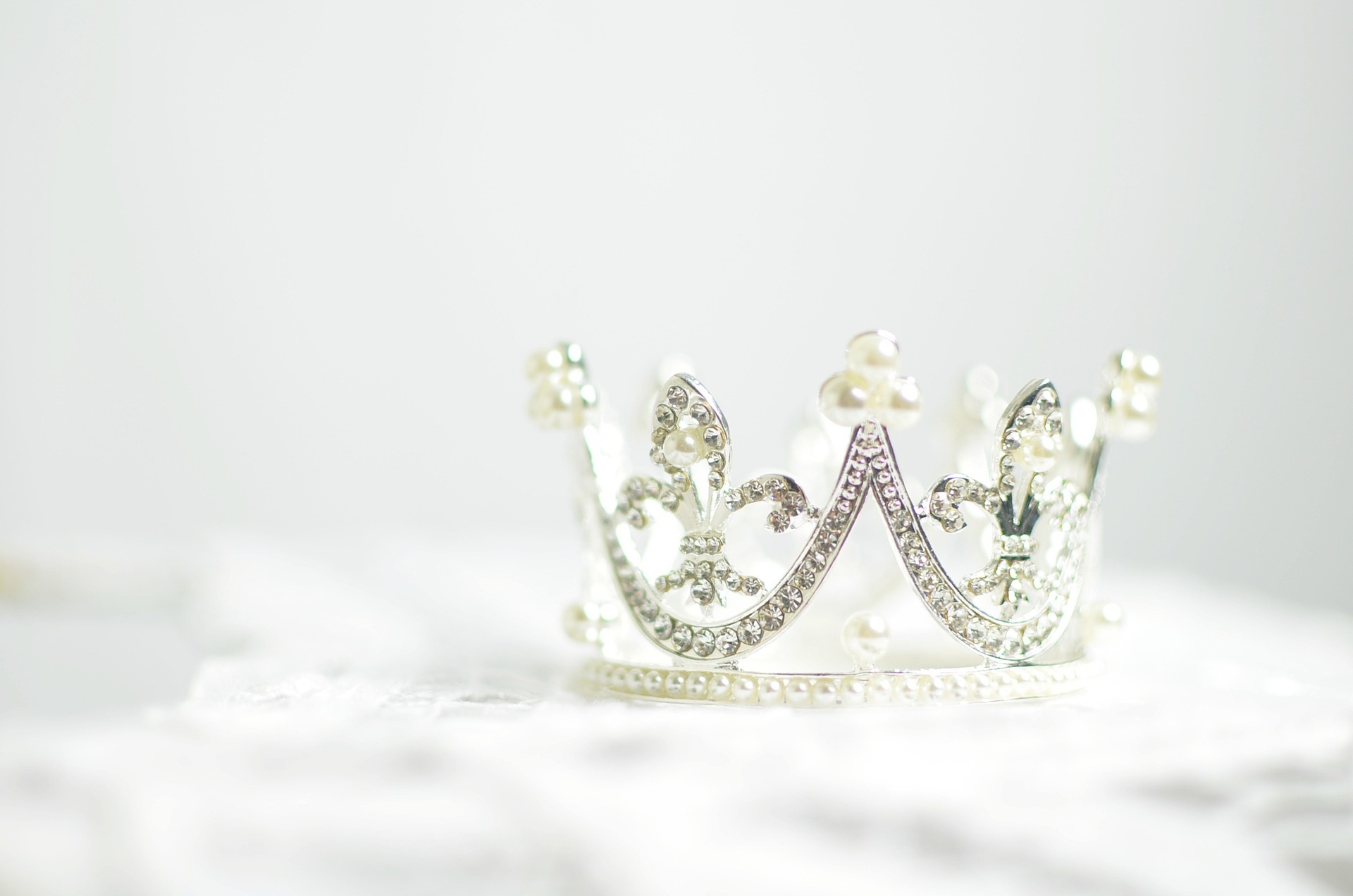 The wait is finally over and the much-anticipated Season 5 of The Crown is set to hit our screens on the 9th of November. With Season 4 crescendoing into the row of all rows between Charles and Diana, an unresolved love triangle and a frosty reception from the Royal Family for the people’s princess during Christmas at Sandringham, it’s clear to see that the royals had more to worry about than deciding which chain to match with their outfit.

With Season 5 looming, we look back over some of The Crown’s most iconic jewellery selections and predict some of the stand-out pieces we expect to make an appearance in Netflix’s latest season this winter.

When it comes to engagement rings, most of us are presented with one of our partners’ choosing - but not princess Diana! Possibly one of the most iconic royal rings of all time, episode 3 of season 4 reenacts the moment when Diana got the opportunity to hand-pick her engagement ring, out of an exquisite selection - many of which were royal family heirlooms.

In a controversial turn of events, however, Diana opts for a stock item from London jewellers, Garrard & Co, that could have been purchased by anyone. The ring in question was a dazzling 12-carat sapphire cluster ring. When asked why she chose this ring, she reportedly responded, “because it reminds me of my mother's engagement ring and it’s the same colour as  my eyes.” 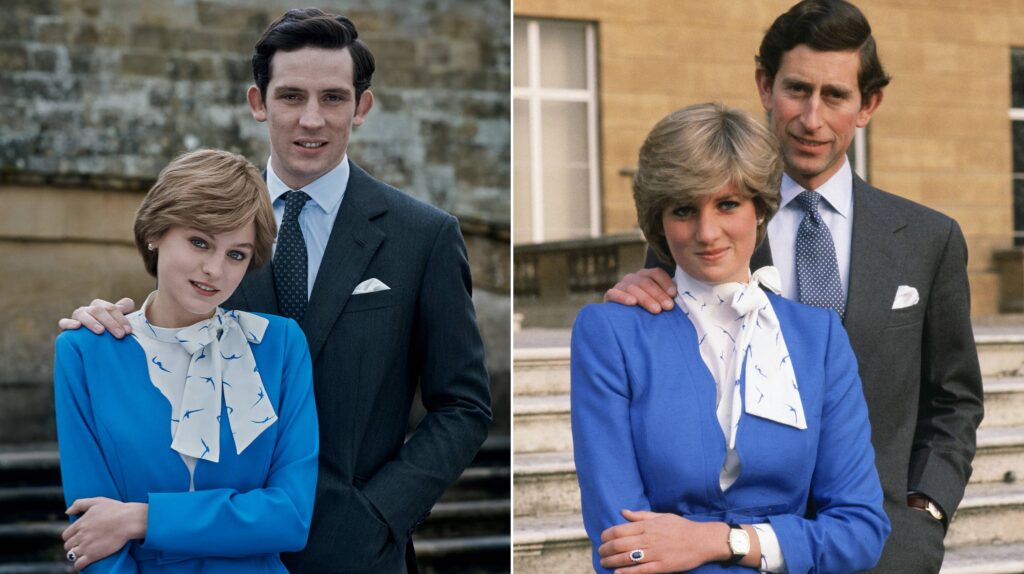 The historic ring has since been passed down to the new Princess of Wales, Kate Middleton, after Prince William’s proposal.

In a memorable episode of Season 2, Queen Elizabeth takes colour coordination to new heights with her royal blue dress, embellished with sapphire jewellery as she meets President John F. Kennedy and his wife, Jackie. The bejewelled ensemble includes earrings, a necklace and a brooch. 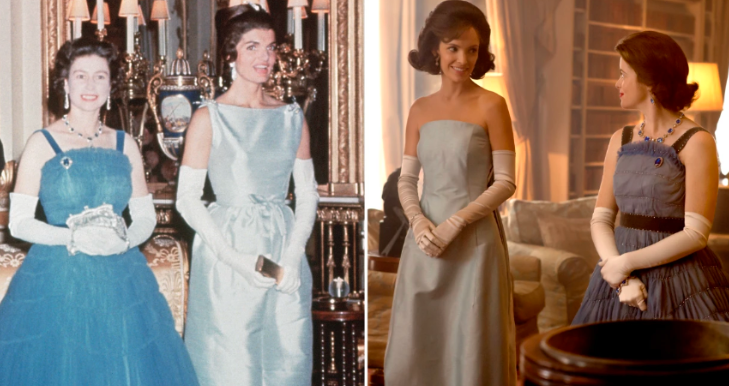 These jewels are thought to represent The Queen’s favourite sapphire set which was a wedding gift from her father, King George VI.

Rumoured to be one of Queen Elizabeth II’s favourite pieces, the Grand Duchess Vladimir Tiara is said to be another one of the real-life Queen’s favourite pieces. Commissioned in 1874 by Duchess Vladimir, this opulent piece was smuggled out of Russia when the duchess fled her country during the Revolution of 1918. The Vladimir tiara is crafted with 15 intertwined diamond loops, with pendant emeralds or pearls hanging from them. These circles sit on top of a row of brilliant-cut diamonds. 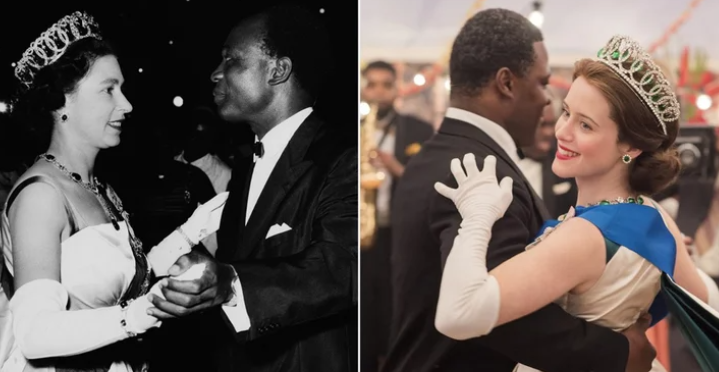 The duchess’ family later sold the tiara to Queen Mary and it was eventually inherited by Queen Elizabeth II who was often seen wearing it over the years.

Which Historic Jewellery Pieces Are Predicted To Feature In Season 5?

With Season 5 set to premiere on the 9th of November, we expect to see a healthy dose of scandal, drama, whirlwind emotions and - of course - an array of impressive historical jewellery pieces.

The Lover’s Knot Tiara was commissioned in 1913 for Queen Mary, before being later inherited by Queen Elizabeth II. It was then lent to her daughter-in-law, Princess Diana, during her marriage to the Prince of Wales.

Thanks to Diana, The Lover’s Knot became one of the most recognisable pieces of jewellery within the royal family’s collection. The people’s princess famously paired it with a white, pearl-embellished ensemble while visiting Hong Kong in 1989. The royal family heirloom consists of brilliant-cut diamonds and a collection of 19 hanging pearls, all set in silver and gold. It’s said that the tiara was so heavy that Diana used to get headaches from wearing it. 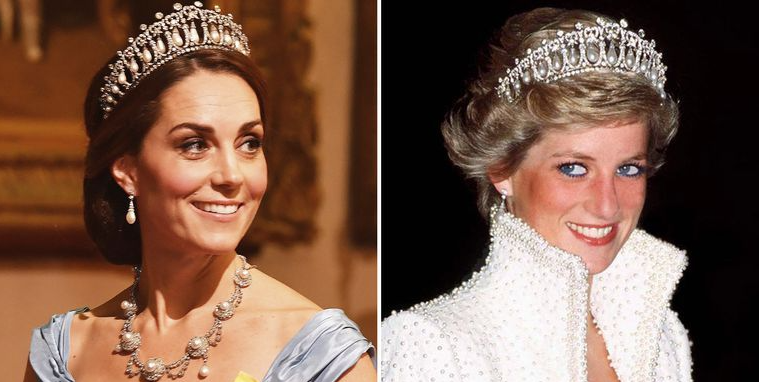 As this was such a popular piece with the princess, there’s every chance we may well catch a glimpse of The Lover’s Knot on our screens in season 5.

Recently making headlines all over the press, the new Princess of Wales was spotted wearing this royal heirloom as a tribute to Queen Elizabeth II, on the day of her majesty’s funeral. The pearls are said to have been gifted to Queen Elizabeth II by the Japanese government. These were later crafted into a statement pearl choker by the crown jeweller, Garrard. Its intricate design includes four rows of pearls with a central diamond clasp in a teardrop shape, each side including three rows of diamonds that join at the top and bottom with marquise diamonds. 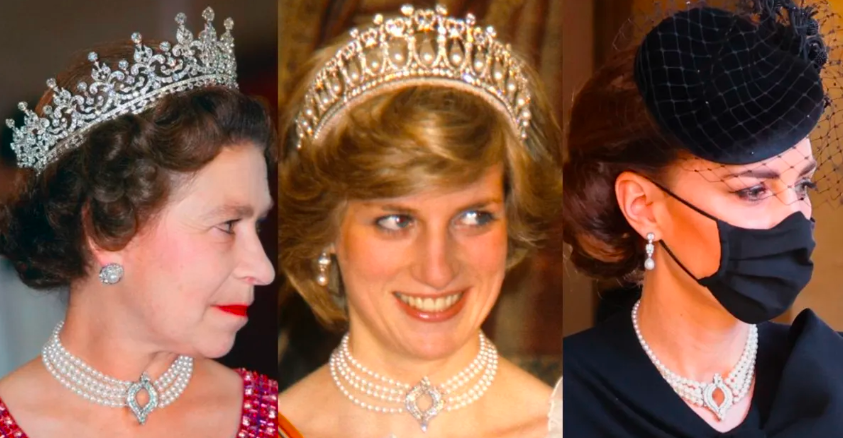 This recognisable royal necklace was a firm favourite of both Queen Elizabeth II and Princess Diana, who was often seen wearing it during a state visit to the Netherlands in 1982. It is for this reason that it was considered to be a very poignant choice for Kate Middleton to wear at the funerals of both Prince Philip and Queen Elizabeth II. We’ll be keeping our eyes peeled for this iconic historical piece of jewellery in the latest upcoming season of The Crown.

Originally purchased by King George VI for his wife, Queen Elizabeth, this headpiece was gifted shortly before he succeeded his brother to take the throne. The Queen Mother subsequently gifted the piece to her daughter, then-Princess Elizabeth, on her 18th birthday.

Over the years, it has been worn by the Queen’s sister, Princess Margaret, and the Queen's daughter, Princess Anne, before being loaned to Kate Middleton to wear when she became a member of the royal family in 2011 as a decadent 'something borrowed'. 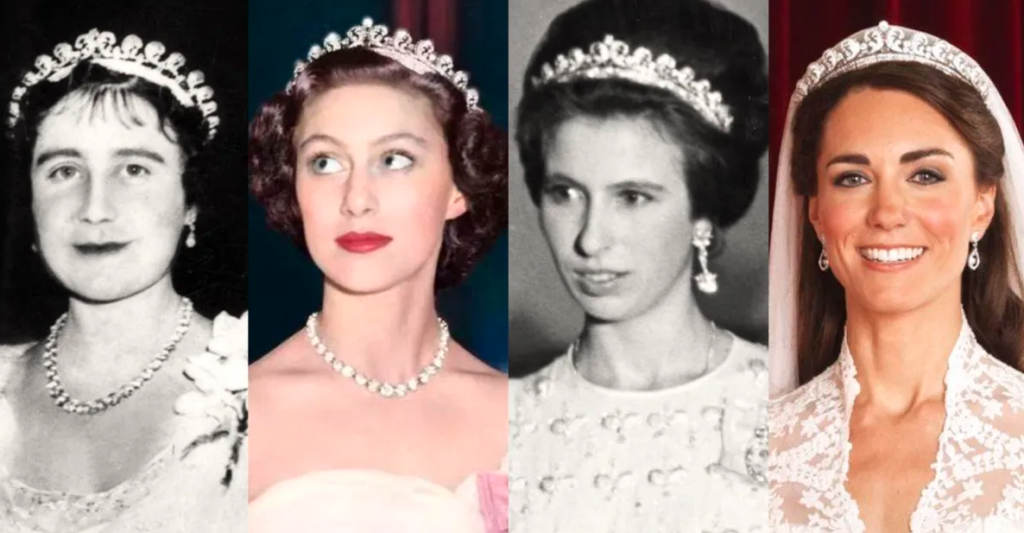 Crafted in 1936, the exquisite tiara is paved with 739 brilliant-cut diamonds and 149 baguette-cut diamonds, taking its name from its circular halo shape. Nowadays, of course, it’s better known as Kate Middleton’s wedding tiara. With so much history behind this piece, and having been worn by so many members of the royal family, we expect to see this iconic piece make an appearance in season 5 of The Crown.


For all the latest news and updates, visit the Hatton Jewellers blog or explore our Facebook or Instagram pages for further jewellery inspiration.