Free UK Delivery On Orders Over £100

A Brief History of Gold Jewellery 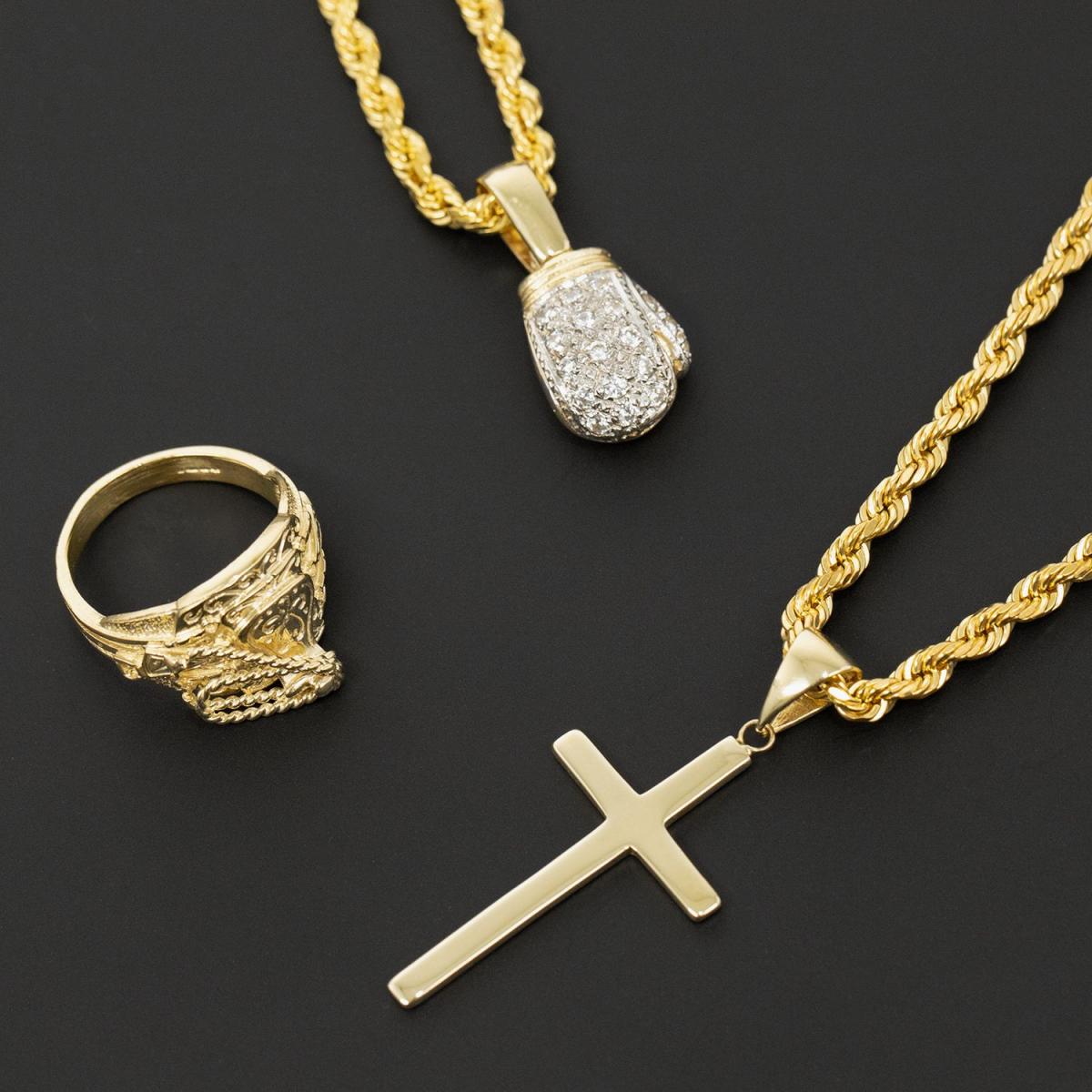 The history of gold jewellery is vast and goes back centuries.  The earliest record of gold being used in jewellery dates back to ancient Egypt, with necklaces, bracelets, heavy neck collars, pendants and earrings galore. Made from what is known as the most precious metal, it’s no wonder that gold jewellery is renowned for its symbolic reputation of wealth and social status.

Gold jewellery not only has a well-rounded history, but it is also completely timeless in style. From gold rings to men’s gold chains, it is one of the most versatile and durable metals you can buy.

The obsession with gold can be seen throughout history and it is still one of the most desirable metals for making jewellery today. In this blog post we’ll be looking at the history of gold jewellery.

Gold Jewellery Through The Ages

Due to its durability, versatility and timeless value, gold has been used as a symbol of status and wealth for many years. Its use across a wide range of cultures and religions has meant the styles and use of gold jewellery has changed drastically over the centuries.

In ancient Egypt, gold jewellery was mainly worn by affluent members of society to show wealth and power. It was a highly desirable metal due to the luxurious look and feel as well as its rarity. Gold was used in abundance by pharaohs and significant members of society. When the tomb of King Tutankarmum was discovered in 1922, it was said to be filled with gold.

Motifs were often used in ancient Egyptian gold jewellery with animals, sphinxes and the udjat eye being amongst the most popular.

Gold jewellery was often worn by ancient Greeks to symbolize upper class wealth and social hierarchy. The pieces were known to be elaborately decorated, extremely ornamental and also used as a protection against evil.

Gemstones were rarely used in ancient Greece for gold jewellery. Instead, complex metal work and intricate designs were often formed to mirror the beliefs of society. The ancient Greeks created the ‘Hellenistic’ style, meaning intertwining floral patterns, alongside gods and animals, were most commonly found in this era of gold jewellery.

The Mughal Empire influenced the style of gemstone gold jewellery. The history of gold jewellery in ancient India was known to be considered as royal, protective and hopeful. Today, gold jewellery is often gifted to new brides to ensure financial security.

Jewellery from India is known to have a higher concentration of gold, giving it that rich yellow gold look and feel. It also usually results in a 24 karat piece.

Though silver was known to be more plentiful in ancient China, gold jewellery was hugely popular. It was worn by men and women of all classes and considered to protect the wearer. Over time, gold's durability and timeless appeal has made it even more popular and it has now become a great form of investment.

What is The Gold Standard?

Put simply, the gold standard is a monetary system. Using the gold standard, a country’s currency or paper money has a value directly linked to gold. A country that uses the gold standard sets a fixed price for gold, buying and selling the precious metal at that price, which determines the value of the currency.

In 1717 the UK set the gold standard, meaning that currency is linked to gold at a fixed rate. The rest of the world, apart from China,  followed suit in setting a gold standard between 1870-1900a. However, following the First World War, many countries moved to fractional gold standards in 1914 to try and fix the economy, not returning to the gold standard until 1925.

The gold standard system is not currently used by any government as it became clear that the gold standard was unable to hold up during times of economic turbulence. Since the end of the gold standard, the production and price of gold has only increased demand and it is unlikely the adoration of gold will end any time soon.

Why Is Gold Used For Jewellery?

Alongside the historical value of gold jewellery, there are several further qualities that make it a perfect metal for exquisite jewellery. One particular reason is that it is the least reactive of all metals, meaning it does not react with atmospheric moisture or oxygen, so it is less likely to rust or corrode.

Gold's malleability allows it to be moulded into various shapes and designs — perfect for creating intricate jewellery pieces and only adding to the lustrous look that gold is renowned for. The high resale value of gold also makes it one of the best investments you can buy.

The History Of Gold Jewellery in Fashion

Following a period of gold being less sought-after during the first half of the 1900s, the extravagant styles of the 1950s, 60s, 70s and 80s meant that yellow gold became extremely popular again within the fashion industry. Yellow and white gold is still hugely popular today, from statement men’s gold chains to gold earrings, gold jewellery can be worn for any occasion in a range of different styles.

Arguably, the best part about gold jewellery is that it is always in style. Designs may change with the trends, but  gold will continue to hold its place within the fashion industry. From gold chains to precious gold earrings, gold will continue to not only hold monetary value but also benefit from a timeless fashion appeal.

What Is Gold Jewellery Made Of?

Gold is a chemical element with the symbol Au and atomic number 79, this means that gold is one of the highest atomic number elements that occur naturally. As gold itself is very soft and malleable, it needs to be mixed with other metals such as copper, silver, zinc, and sometimes palladium or nickel to ensure it is durable enough to be crafted into jewellery.

For more information on gold, check out our Gold Guide and Hatton Jewellers blog.