A History of Bling and Hip Hop Jewellery 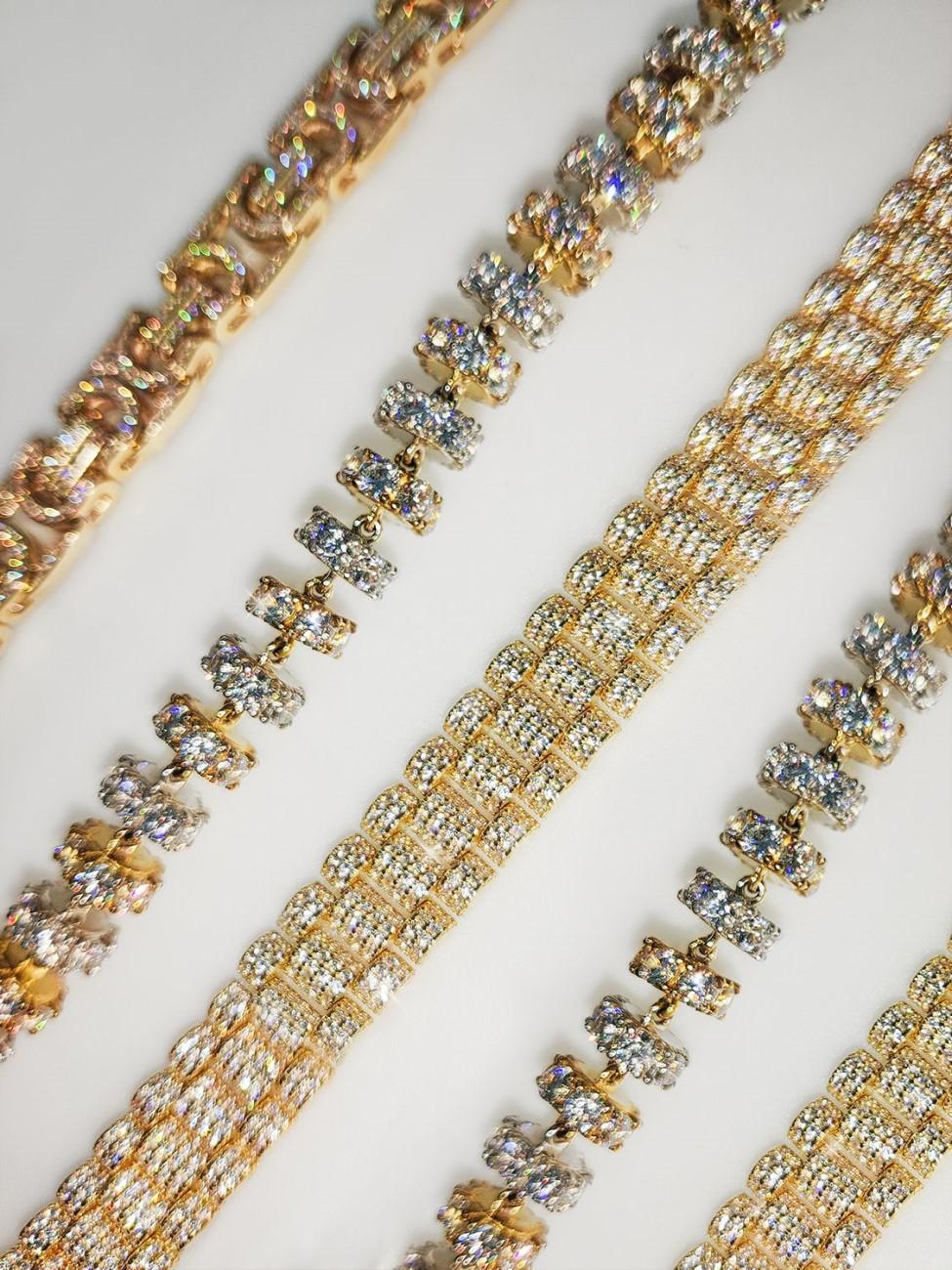 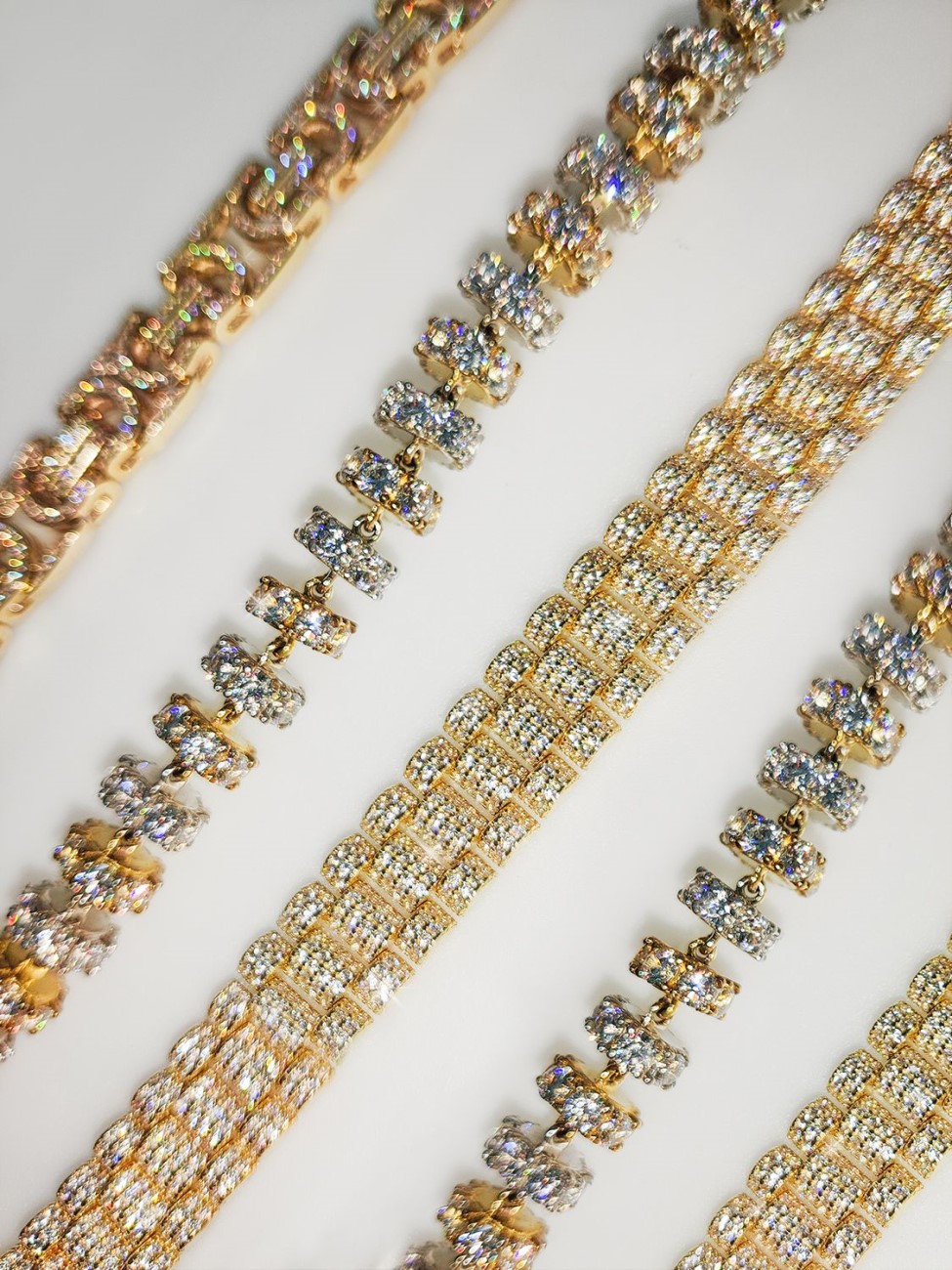 Hip hop is all about large bling chains with pendants dripping in diamonds and oversized gold rings. From the dawn of hip hop to the very different music scene today, iced out jewellery has continued to grow substantially in popularity within the culture.

The extravagant sparkle of iced out jewellery not only shows social status, it’s also become part of the marketing strategy within the hip hop industry. The more a piece of jewellery sparkles, the better!

In this blog post, we will explore the history of bling and hip hop jewellery.

What is Bling and Hip Hop Jewellery?

Bling jewellery is usually used to describe iced out or diamond encrusted jewellery. “Iced out” is a term used for jewellery that’s completely submerged in diamonds, providing an undeniably extravagant sparkle.

Predominantly worn by A-list celebrities and rap superstars, from chains to pendants, almost any piece of jewellery can be iced out to guarantee that it will turn heads.

The 1970s — the decade hip hop was born. Rap music was most often made by and for people who could only imagine themselves dripping in diamonds. However, when they had the opportunity to climb in social status, they just had to shout about it through the clothes and jewels they wore. Their style was a form of expression parallel to the messages behind their music. Flashy and flamboyant, with brightly coloured tracksuits, leather jackets and trainers galore, the late 1970s hip hop scene saw a very distinctive style of dressing.

During the 1980s, hip hop and its jewellery were transformed — what was typically basement music edged much closer to the mainstream. Kurtis Blow, the first gold-selling hip hop artist, was one of the first rappers to popularise wearing multiple chains and medallions, posing on his album covers wearing gold chains and pendants.

Bling chains soon became the norm for successful hip hop and rap stars. As well as this, oversized hoop earrings were commonly worn by women in the rap industry. Gold was quickly becoming the standard metal and colour used in hip hop jewellery.

In the 1990s, hip hop music stepped up to become an industry on its own. Hip hop jewellery in the 90s was covered in diamonds and gemstones, and the more your bling sparkled, the more status you had! As the music genre became more commercialised, rappers' jewellery quickly became a part of their persona.

However, the hip hop bling didn’t stop at iced out chains and pendants, as diamonds became all the rage for grillz too — jewellery worn over the artists’ teeth. Traditionally, grillz were made using gold and diamonds, often taking up to three months to produce. Molds were sent to the customer, who had to make their own impressions before sending them back.

By the late 1990s to early 2000s, hip hop and rap artists were earning more money than ever before. They had a huge range of projects outside of the music industry, from trainers to liquor. With bigger budgets came bigger chains and pendants — it was all about the length of the chain and the size of the iced out pendant. T-Pain is a great example of the time as he exhibited a $400,000 chain that clearly states “Big Ass Chain”.

Thanks to groups like Hot Boys, Lil Wayne’s first musical project, the term “bling bling” became a well-known part of the English language. In April 2004, the term was even added to the Oxford English Dictionary. Around this time, Lil Wayne’s mixtapes were making him one of rap’s hottest properties — he celebrated his success with $150,000 grillz, the most expensive set in hip-hop.

Today, iced out jewellery is one of the most popular types of jewelry on the market. There’s nothing that quite stands out in the same way as a piece of jewellery covered in sparkling diamonds.

Hip hop jewellery trends today have transitioned slightly from heavy, chunky rope chains to large iced out pendants, sparkling diamond earring and watches encrusted with gems. Rap stars have been known to spend hundreds of thousands on iced out jewellery, with one of the most extravagant being Rick Ross, who spent a whopping $1,500,000 on a blinged-out self-portrait pendant.

Hip hop fashion quickly went from the streets to impacting high fashion; you can look around and see influences from the hip hop industry everywhere. Prestigious designer Karl Lagerfeld is well known for adding elements of the hip hop bling scene within his designs, adorning the Chanel runway with hip hop style including large chunky gold chains. Baggy trousers and nostalgic ’90s athletic wear have populated not only the runways, but also high street fashion in recent years.

The fashion industry has even been reflected back into hip hop music. Rapper and mogul Jay-Z even wrote an ode to the New York fashion designer Tom Ford, Gucci's creative director for ten years, on his album Magna Carta Holy Grail.